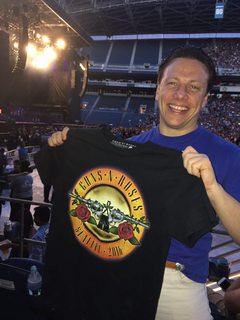 One of the items on my vision board is to see 12 live concerts every year.

On August 12, I drove to Seattle to see the reunited Guns 'n' Roses.

It was one of the best concerts I've seen. Easily in top 5.

While GNR were the headliners, the show also featured another one of my favorite bands, Alice In Chains, whom I'd seen live 3 times before. So technically, this lets me mark 2 concerts—#7 and #8—off my annual goal of 12.

Incidentally, just a few days before the show, I read an interview with Twisted Sister's guitarist, Jay Jay French where he wondered how come there are no 25 year-old rock stars anymore. He said, "When I was 17 years old... none of [the bands he liked] were older than 26. We, as 17-year-olds, never went to see bands that were 60; we saw bands that were all 25... If I told my mother I was gonna go see a band with 60-year-old guys, she'd look at me like I was crazy or I was going to some jazz band or some classical group. So now we play festivals where all the bands are 60 year old: us. Maybe 50, with Metallica."

I'm sure none of the bands that I love were ever planning to play their music until they were old grandpas. I often wonder the same thing. Where are the new bands that are half as big as what Guns 'n' Roses, Bon Jovi, Van Halen, Faith No More, Ozzy, Motley Crue, Iron Maiden, Metallica and many many others used to be? Where are the new Stings, Elton Johns, Stevie Wonders, and Billy Joels?

And then I remember the glee with which the music industry was destroyed by illegal downloads. Unlike the movie industry where most of the money is made in the theaters from people who have not seen the film before and are paying for the experience, it's a completely different story with music.

This works for old bands who have written a catalog of greatest hits that still sells out arenas. But it's a problem for new bands who are working hard to exit obscurity.

That's why so many famous bands are now refusing to make new albums. They know they are not going to sell enough copies to justify the effort, and they know that fans who buy tickets to their concerts only want to hear the old stuff anyway.

This is all fun and games, but how will the music scene look like 20 years from now? Or are people going to be attending shows of holograms of long-gone people, just like they recently had Dio's hologram perform at Wacken Festival?