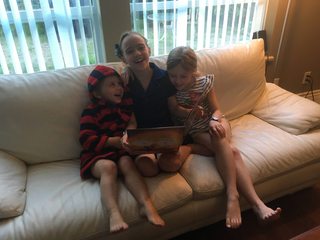 In early June, Masha (11-year-old) accompanied my wife to a jewelry salon—and one particular item caught her attention.

She really wanted us to get her a necklace with a diamond butterfly pendant.

There were three problems with it.

The pendant cost over $3,500. She didn't have that kind of money. And I wasn't going to shell it out on a necklace for an 11-year-old.

But I decided to turn that into a lesson.

I told her that if she can come up with a way to make $350 by selling something to people outside her normal friends and family circle, I'd finance the rest.

The first reaction was very predictable. It was panic, anger, and denial.

"What am I supposed to offer people?"

"How will I reach out to people?"

"I'm not sure I want that necklace anymore."

"Why can't you just buy me the necklace—and I'll gradually pay back from my allowance?"

"Can I do something for YOU instead?"

And lots more and more.

She had to come up with something—or else.

And eventually she did.

She just launched her first Fiverr campaign where she's reading books to children.

The idea is, children love it when someone reads them a book, especially when the book is personalized it to them.

Problem is, parents are busy.

She can read stories in English, French, Spanish, or Russian.

You pick the book, she reads and records the video. Then she uploads the video to Youtube and shares a private link.

We planned to launch her Fiverr campaign 5 days ago, but Fiverr is apparently very finicky about gig descriptions. Took us  the whole 5 days to get them to approve the gigs. First the videos were too long. Then descriptions contained unauthorized links. Then images were too similar as between the gigs. And every time it wold take them 18 hours to review the next iteration.

The longer videos made a lot more sense and can be seen here: English, French, Spanish, or Russian.

We have no idea if people are going to be interested in something like this, but she sure hopes she's discovered a gold mine that will not only get her the necklace but would actually be her first steady stream of income besides allowance.

Check out the videos and if you have little ones that you think would enjoy watching her read them a story, order her gigs on Fiverr:

Masha Will Read a Story to Your Little One in English

Masha Will Read a Story to Your Little One in French

Masha Will Read a Story to Your Little One in Spanish

Masha Will Read a Story to Your Little One in Russian