My Biggest Lesson From 2018 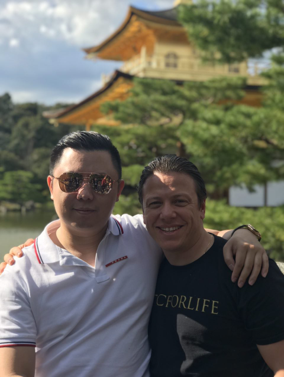 For most of my entrepreneurial career, I was ticked off by one trait from successful business people I admired.

Every time they'd do an interview or accepted an award, what they said could be boiled down to “It's not about me, it's about my amazing team!”

And that used to throw me off completely.

I was like, “Come on! You built this whole thing! Give yourself some credit! Yes, you hired all these people to do what you tell them to do. So what, it's what you pay them to do. I wonder when someone will finally have the balls to stop being a hypocrite and just say it like it is!”

Until I joined my mentor Dan Lok for three weeks in Japan last October.

The trip was amazing.

Probably one of the most gratifying off-the-bucket-list moments.

Full of all sorts of learning experiences and inspirational quotes.

But there was one thing that stood above all.

I saw how Dan operates with his team.

And I saw what his team does for Dan.

And then we had “the talk.”

And then the coin finally dropped.

I realized quite a few things.

I realized I had been more in love with the idea of being a business owner than with our outcomes.

I realized that I'm not good enough to build the business I have envisioned by orchestrating everything and telling everyone what to do.

I realized that all my frustrations around team members (former and current) were around my failure to understand that every business has two separate teams.

Sometimes, they may overlap and talk to each other, but they don’t have to.

The first team is a team of specialists. They are professionals who do exactly what I pay them to do (VAs, trademark agents and attorneys, designers, closers, video editors, searchers, etc.)

Separate from it is the core team. Their only goal is to do whatever it takes to get us towards the goal of becoming the most successful trademarking company in the world.

We’ve identified a number of metrics that I’m not going to share here. But essentially the role of every person on the core team is to help us figure out how we could get closer to hitting these metrics.

The interesting thing about the core team is that you don’t get to DO cool stuff because I told you you’re on the core team.

You get to BE on the core team BECAUSE you do cool stuff.

In fact, everyone knows they’re getting their “points” by coming up with 4 layers of core-team actions:

Level 1: Bring up a “What if we could somehow do X…” question.

Level 2: Come up with a “I know someone or something that could help us do X…” idea.

Level 3: Say: “Would you like me to do X? I think it will help us accomplish Y…”

As I said, every business has these two teams. And they are completely separate and independent—even if you don't formalize it.

That was a massive mindset shift for me, which made me reassess a lot of things the company was growing.

The team has never been more excited for what’s ahead.

Like I said, there were many lessons in 2018. But of all of them this was by far the most valuable.

Let me know what you think.