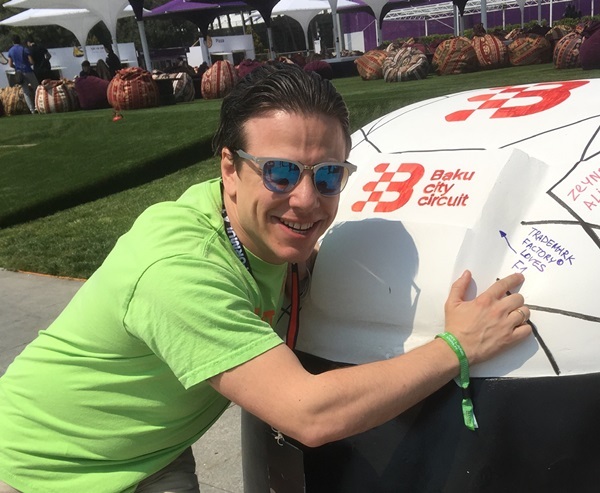 I just got back from my trip to Moscow, Baku, Amsterdam, and Luxembourg.

I will share the lessons I’ve learned in Amsterdam in the next issues of this newsletter.

Today, I wanted to share with you something that hit me when I was attending a Formula 1® weekend in Baku, Azerbaijan.

But before we get there, in case you’re wondering why Baku: for two years straight, the Baku track offered the craziest racing of the entire F1 season. It was the race to watch. It’s the fastest city circuit in the world, where something totally unanticipated always happens. Someone runs into the wall, or their engine blows up in a tight spot, or two racers simply choose to cross their trajectories when, all things considered, they shouldn’t…

This race is always a roller coaster, and I expected nothing less this year as well.

I’ve been following Formula 1 for over 20 years. Actually, it’s the only sports that I follow.

And guess what, not a single time when I attended a race live did Hamilton win.

This time was no different, Lewis came in second.

Except, unlike the other times, the race itself was mind-blowingly boring.

It’s surely one of the Top 5 most boring races since I’ve started watching F1 in the 1990s.

So I couldn’t say, “Oh well, Lewis didn’t win, but at least it was a captivating race to watch!” or “Oh well, the race may not have been too interesting, but at least you’ve finally witnessed Hamilton’s triumph live!”

My thoughts after the race were, “I really didn’t need to fly all the way to Baku to see this…”

But I didn’t know the Sunday race would be so disappointing during the pit walk on Thursday.

Pit walk is basically when they let ticket holders go on track and walk right next to the pit lane garages to see the cars, the engineers, and sometimes even the drivers.

I was full of excitement: this was my very first pit walk!

And as I was walking through the pit lane, I noticed something that I wanted to share with you.

Some of these sponsors are well-known. Some are still somewhat obscure.

Some of these companies sponsor every race in the season. Some only sponsor one or a few races.

Some team brands are well known outside of Formula 1 (Ferrari, Mercedes, Red Bull). Some only mean something to those who care about F1.

But all these companies and brands have two things in common.

First, whatever their underlying reasons (could be a well-calculated attempt to use their association with motorsports to position their brand as supporter of innovation, speed, fearlessness, precision, or any other such virtues or it could be a personal interest of the brand’s owners), they all sponsor F1 because they want more visibility for their brand.

They want to see their brand on a race car during the F1 weekend.

They also want millions of others to see their brand dashing along the track.

Hopefully, in front of other cars.

The second thing that’s common is that all brands that sponsor events like that are trademarked.

As I was yawning through the race on Sunday, I actually did some research into some of the most obscure sponsor brands I could spot.

They are ALL trademarked, one way or the other.

I know I couldn’t.

Thing is, they’re all serious about building the value of their brand.

That’s why they spend hundreds of thousands and millions of dollars sponsoring events like that.

So next time you’re at an event (it does not need to be a Formula 1 race. It could be a film festival, a trade show, a conference, or any other event that attracts a lot of participating businesses and sponsors), pay attention their trademarking strategy.

Chances are, the only ones who haven’t bothered to trademark their brand are those whose brands are hardly worth anything.

By the way, I recorded a video with some highlights from the track.

Make sure you check it out.