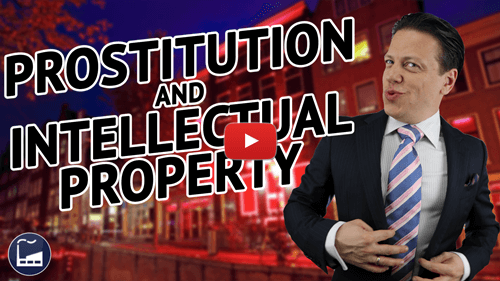 If you follow our YouTube channel, you may have seen the two videos I published as a result of my trip to Amsterdam in May.

One was about weed and different approaches to trademarking weed-related products and services.

The other one was about the common thread between prostitution and intellectual property.

I received a few comments to the effect that the prostitution video was basically clickbait and that the actual video had nothing to do with prostitution.

First, I was enraged: Me, clickbait?

Then, I was frustrated: How can you not see it?

And then I re-watched the video—only to realize that I was so excited to shoot the video that I completely left out the mental process that led me towards it.

Since I'm no longer in Amsterdam, I'm not going to shoot a new version of the video. But I thought this newsletter would give me a great opportunity to explain what I actually wanted to say.

By now, you probably know that I'm not a big fan of government regulation or, even worse, prohibitions.

Give me any example of how the government regulates something—anything!—and you can bet your last dollar I will not be a big fan of it.

With that context in mind, let me take you back to prostitution.

You can't go to Amsterdam and not visit the red-light district.

As I was walking through rows of human flesh for sale, I couldn't get one thought off my mind.

No, not THAT thought.

While governments only have two reactions to prostitution—they either ban it or they regulate it—the MARKET is the one thing that reallydetermines how sex services are bought and sold.

The good old supply and demand.

As long as there are men willing to pay for sex, there will always be women offering it to them.

No matter the bans or the regulations.

My next thought was that in a place with a high concentration of prostitutes whose services can be legally obtained (of which Amsterdam's red-light district is a perfect example), supply should be higher than in other places where prostitution is criminalized.

Which should probably lead to lower prices Amsterdam sex workers would charge compared to, let's say, prostitutes in Washington D.C. (and no, I don't mean politicians).

This is how supply and demand work.

If supply goes up while demand remains the same, prices would typically go down.

And the other way around.

And that's what led me to the idea that the whole point of intellectual property is to create a legal monopoly over its use.

As an aside, I don't think there is anything inherently bad about monopolies. The only monopolies that are evil are those instituted by the government for the purpose of exercising control over free people.

To go back to my earlier point, licensing of banks and lawyers creates a monopoly with the sole purpose of limiting the right of free people to voluntarily do business on their own terms.

The government should not have the right to prevent me from hiring a car mechanic with no law degree (or a prostitute for that matter) to represent me in court.

The government should not hold the monopoly over postal services, healthcare, or any other services, except those that relate to enforcing peace and order.

The monopoly that flows from intellectual property laws is technically also instituted by the government. But it's different in that it is not instituted for the purpose of limiting the right of free people to voluntarily do business on their own terms.

What IP does is it creates conditions for creators to make the results of their creative activity available to the world on their own terms—knowing that they will be able to do something if these terms are not followed.

But, like any monopoly, an intellectual property monopoly is all about limiting supply.

And it's the ability to limit supply of an intangible object that would otherwise be extremely easy to copy that makes intellectual property so valuable.

It's what creates true monetary value around it.

And in case of trademarks, when you register your trademark, you get an enforceable monopoly to limit the supply of your brand.

And that is precisely what makes trademarks so valuable.

Do you see now how my thoughts traveled all the way from prostitutes to trademarks and monopolies?

P.S. As always, please feel free to reply and share your thoughts on any of this.