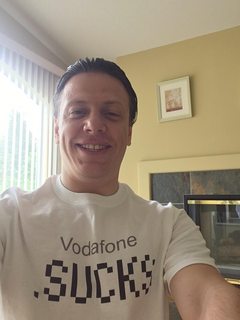 But I just couldn't let this one go unreported.

And yes, there is an actionable lesson in this, which is really why I am posting it.

Anyway, as you know, I just got back from Barcelona, where I spent a week meeting with thousands of trademark attorneys from around the world at the International Trademark Association annual meeting.

First thing I did when I arrived was I bought a local SIM card so I would not have to depend on my ability to steal free Wi-Fi while I was using my phone outside of my hotel room, which was 90% of the time.

After reading some reviews I decided to go with Vodafone.

(Note to self: sometimes you can't trust reviews.)

Call time felt humiliatingly limited but all I really cared about was data—and I assumed that 2.5GB should be plenty for 5 days, given that I would have access to Wi-Fi in my hotel and in the convention center.

Well, the data ran out in about a day. All of it.

No, this rant is not about how expensive data plans are in Spain.

Or how unsophisticated their data tracking is.

I would have gladly paid EUR 25 a day to have reliable access to the internet while I was there.

Here's where the rant begins.

I called the support to see how I could pay to get more data. Problem is, they only speak Spanish.

The automated phone menu also only works in Spanish.

My daughters speak Spanish, one of them fluently. I don't. All I can say in Spanish comes from an old Beavis & Butt-Head episode, where Butt-Head shares his proficiency in Spanish by proudly declaring, "Burrito" and "Uno Buck."

I'm on their turf.

As much as I think it would make sense for them to have an option for people who wanted to pay while talking to someone in English, I understand that they can't necessarily have support speak all world languages.

Here's where the real fun begins.

I go to my hotel's reception and I ask them to call support on my behalf.

The receptionist spends 35 minutes talking to someone in perfect Spanish.

Finally, he asks me for my credit card.

I give it to him—and he reads it back to the support rep.

They speak for about 10 more minutes.

My savior hangs up the phone, gives me back my credit card, and tells me that they couldn't accept the credit card payment at this time.

Curious, I check with my bank to make sure my card is not blocked and has enough limit. Everything is fine.

I got to run to a meeting in a different hotel.

There, I find a few moments and ask another person at a reception to call Vodafone support and pay on my behalf.

30 minutes later, they ask me for my credit card, and 10 minutes after that, they say that they can't make a payment over the phone with my card.

What can be done?

Oh, easy, I can just go to an ATM and recharge my phone credits from there.

About the fifth ATM I used had an English menu AND an option to pay for the phone.

Got a notification from Vodafone that they got my payment.

What I did not get is data connection.

I may just as well not have paid them at all.

For three remaining days, I had no data.

It was probably one of the most frustrating customer experiences in my life.

And there was one thought that kept coming back to me.

Why in the world would a business create a system that makes it difficult for people to give you their money?

And then I looked back at all the innovations I created with Trademark Factory® and realized that the things that worked best were all about streamlining the process for clients. They were all about making it easy for brand owners to order our services.

So here's a big lesson from this rant.

If you're running a business, look at it from the perspective of your customers. How can you make it easier for them to buy from you.

P.S. And if you're wondering, yes, it's a real Vodafone.Sucks tshirt. I had it made in Barcelona. Getting it was much easier than paying Vodafone.