4 Life Lessons From My Trip To Singapore 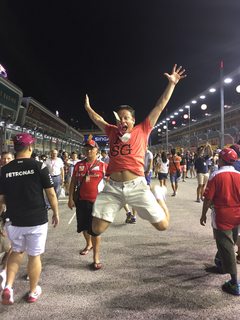 Singapore had been at the top of my dream travel destinations for 5 years, and – guess what? – I have just returned from that amazing city state that was home to the 15th Formula One race of the season.

You're welcome to have a look at the small photo album I've created of the trip.

In the process, I learned a few things that I wanted to share with you.

LESSON #1: DREAMS ARE CLOSER THAN THEY APPEAR

Formula One happens to be the only sports that I follow, so early this year, I had a conversation with my wife Emilia that went along the lines of:

“You know what, this year I will probably go see the U.S. and Mexican grand prix. They’re back to back. It’s a short flight from Austin to Mexico City. This should be good, but, of course, the biggest dream for me would be to go and see the race in Singapore…”

“Have you checked how much it would cost to go to Singapore?”

Shockingly, when I checked, I realized that the trip to Singapore, something that I regarded as one of my most coveted dreams, was not only achievable, it would cost me significantly less than my original plan of going to Austin and Mexico.

The biggest lesson for me here was, no matter how big and distant your dream, break it down into steps necessary to make it come true. Once you know what the steps are, the dream becomes an action plan and thus becomes achievable. I was so paralyzed by the concept of “I want it so bad it must be outside of my reach” nonsense that I never even looked at what it would really take to get there – until my conversation with Emilia.

What I plan to do is closely examine my vision board and figure out what exactly would need to happen (and in which order) for those dreams to become a reality.

Here’s one I’m thinking of right now: play drums in a studio with W.A.S.P.’s Blackie Lawless. What would YOUR first step be if you were dying to make this happen?

I was thrilled and excited when I showed up at the airport on September 12: my dream was about to come true. I went through the usual procedures: checked in, dropped off my suitcase, went through passport control and security, found out which gate I had to fly from, killed some time strolling around the airport, got the gate, charged my phones just to be prepared, munched a burger to survive a long flight that I was planning to sleep all the way through, got back to the gate when there were only a handful of passengers remaining in line.

That’s when they called out my name and said they needed to have a word with me.

I went to the counter and the airline rep told me that my passport was due to expire in less than 6 months.

I said, “I know, I’m planning to get a new one as soon as I get back from this trip.”

He said, “No, you don’t get it. You can’t fly today. Singapore is not going to let you in, and since you’re flying through Shanghai, even if we let you on the plane to Shanghai, you’re going to be stuck there, because they will not let you fly to Singapore and they won’t let you out of the airport because you would not have a legitimate way to get to Singapore.”

My first instinct was to yell and force my way through it all. “Let me in – and I’ll figure it all out later!”

I mean, I was being robbed of one of my biggest dreams in plain daylight. Hell, I even posted a note on Facebook the night before announcing my excitement about the trip, something I don’t do very often. I mean, I couldn’t just go back home and pretend I didn’t spend the last 5 months counting days until I could actually see Singapore.

So after the first 5 minutes of confrontation and trying to fit the square peg into the round hole, I realized it wasn’t working. After all, if I had continued on that path, the only trip I’d be making was the one to the local (Vancouver, or would it be Richmond?) jail, and not as a visitor.

I could almost see a switch go on in my head, getting out of the battlefield and into a place where I was recreating my dream. I asked the rep if they’d let me on the next flight if I somehow managed to get the new passport. This was my only way not to lose my F1 tickets and my return plane tickets. The rep told me that Passport Canada has an option to urgently issue a new passport within 24 hours but they haven’t heard of anyone getting it done the same day. My problem was, the next day would have been too late.

From the airport, I called Emilia, my wife, and asked her to drop everything and fill out the application for my new passport, immediately, find two references, and run to Passport Canada office and beg them to wait for me.

Some of you may not know this, but once you’re at the gate, you can’t just leave the airport. They treat it as if you’ve already travelled. So yes, you have to fill out the declaration once again, stand in line to go through the security, wait for your bag on the carousel, wait in line to get out of the airport. This process took an extra hour and a half.

With my suitcase in one hand and my phone in the other, we coordinated the submission of my passport application. Problem was, they needed my signature and my photos. No problem. With sweat dripping down my face, I got to the Passport Canada’s office, took a picture, submitted the application, and then they told me to take a ticket with a number, sit down, and wait.

Then I waited some more.

My ticket had a letter and a three-digit number after it. Thing is, while they were calling out a lot of other numbers, none of them started with my letter.

I was freaking out.

I was so close but also so far away from my dream!

Finally, 3 minutes, before they shut down the office for the day, they got me my new shining Canadian passport.

Exhausted but totally happy, I went home, took a short nap, and flew to Shanghai that same night. In just some 25 hours I was in Singapore!

Singapore, with all of its unbelievable beauty, is the perfect embodiment of what Ayn Rand wrote about in “Anti-Industrial Revolution”:

Now observe that in all the propaganda of the ecologists—amidst all their appeals to nature and pleas for “harmony with nature” —there is no discussion of MAN’s needs and the requirements of HIS survival. Man is treated as if he were an UNNATURAL phenomenon. Man cannot survive in the kind of state of nature that the ecologists envision—i.e., on the level of sea urchins or polar bears. In that sense, man is the weakest of animals: he is born naked and unarmed, without fangs, claws, horns or “instinctual” knowledge. Physically, he would fall an easy prey, not only to the higher animals, but also to the lowest bacteria: he is the most complex organism and, in a contest of brute force, extremely fragile and vulnerable. His only weapon, his basic means of survival—is his mind.

In order to survive, man has to discover and produce everything he needs, which means that he has to ALTER his background and adapt it to his needs. Nature has not equipped him for adapting himself to his background in the manner of animals. From the most primitive cultures to the most advanced civilizations, man has had to MANUFACTURE things; his well-being depends on his success at production. The lowest human tribe cannot survive without that alleged source of pollution: fire. It is not merely symbolic that fire was the property of the gods which Prometheus brought to man. The ecologists are the new vultures swarming to extinguish that fire.”

What Singaporeans have built on a tiny piece of land in such a short span of time is mind boggling. And seeing the celebration of human achievement at the Gardens by the Bay was so fulfilling! The mere realization that humans, driven by their sense of beauty and their self-interest (or you may call it greed), created all of this is absolutely spectacular!

I have never been more clear that for me, witnessing the majestic grace of man-made achievements (be it architecture, music, art, or consumer goods) is infinitely more rewarding compared to merely staring at what wind, water, air, and other natural factors (excluding man) just happened to “create.”

The first morning after I landed in Singapore, I met two of my clients.

One of them I've known in a different capacity for a long time. He was my trainer at several Peak Potentials' courses. What he taught me at the World's Greatest Marketing Seminar has inspired me to take Trademark Factory® to the next level. What he taught me at Train The Trainer has inspired me to do more public speaking. Mr. Robert Riopel is from Canada, but guess where we ended up meeting? Yep. Singapore! I can hardly find the words that describe how I feel about Robert's decision to choose Trademark Factory® to trademark his brands. I don't like the phrase "giving back," but to me, having Robert as a client means much more than just the money he paid us. We are as successful as we are today in part because of what I learned from him. That's why being able to serve Mr. Riopel has so much symbolism to me. Yes, I'm sentimental like that!

I also brought a trademark registration certificate to our client in Singapore. Could I have couriered it? Possibly. But it wouldn't have been nearly as productive as our meeting for lunch. And next day, I had another wonderful lunch with another IP lawyer in Singapore. I've been saying for quite some time, that my two primary roles with Trademark Factory® now are building systems and building relationships. What better way to do it?

As a P.S. to this lesson, you may remember my report from Chicago Drum Camp last month. Guess what? We've just acquired an amazing new client from that gathering. Of all people, I should know that some business owners love drumming. What it also means is that some drummers have brands to protect!