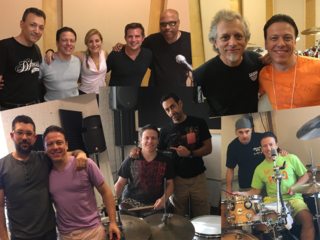 For the third year in a row, I attended Drum Fantasy Camp in Chicago.

I've been a fan of Dave's drumming for over a decade. In fact, all my kids were raised to his album "Heads Up" as we always played it (and no other music) during the physical exercises we would have the kids endure from when they were just a few days old to about 8 months old.

More than that, I named my youngest son in Mr. Weckl's honor.

Can you imagine what it feels like to be able to spend four full days learning from drummers of this caliber and then jamming with them at night! Imagine playing with a live band consisting of monster players like Vinny Valentino , Baron Browne, Chrissi Poland and Stu Mindeman!

I will always remember what I learned from Benny Greb last year. He said, "Don't play while you practice, and don't practice while you play. Most musicians can't focus on what they want to improve during their practice time, and then they keep over-analyzing things instead of enjoying playing when the opportunity comes."

Understanding the concept is one thing, but applying it is quite another.

This was the first year when during the jam with the band, I was able to relax and enjoy the process—albeit not from the first few bars when I was way too nervous, especially since I made a few mistakes.

I just got back home but am already counting days to next year's camp.