How To Print A Billion Dollars In 5 Years 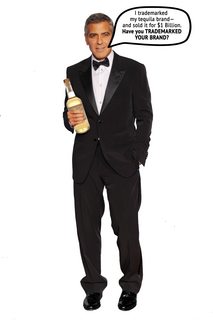 George Clooney has just sold his tequila company Casamigos for a billion dollars.

Read that again. A billion dollars.

Newsflash: George Clooney is an actor, a celebrity. He's not, I repeat, he's not a professional liquor manufacturer.

In fact, he admits to have started his tequila brand by accident some 4 years ago.

He and his co-founders found a distiller in Mexico and instructed the distiller to create tequila that "tasted great and didn't burn going down."

What they sold was basically the brand.

Casamigos tequila brand was launched in 2013.

Guess when they filed their trademark application? May 9, 2011.

A year and a half BEFORE launch.

I don't know how much they would have been able to sell the brand for if it wasn't properly trademarked, but I can guarantee you, it wouldn't have been for a billion crispy dollars.

If there ever was an example how developing, building, and protecting a brand creates a massively valuable asset, it's this.

You and your friend come up with a brand, you trademark it 19 months before launch, you reach some level of success with your brand, which at that point is well protected, and you get an offer to sell the brand off for a bazillion dollars.

I don't know about you, but I think they're feeling pretty good about their investment in trademarking now.

It's basically Clooney and his partner printing a billion dollars in 5 years out of thin air.

What do you say?

P.S. And for those of you who think, "Well, of course, it's George Clooney!"—think again. Diageo would have been able to get Clooney to promote Diageo's other brands for years to come for a lot less than a billion dollars. Of course, he's a celebrity. Of course, it made the deal more desirable for Diageo. But Clooney sold more than his face endorsing Diageo. He sold a brand he created. A brand that will now have a life separate from Clooney.