They Told Me It Doesn't Snow Here... 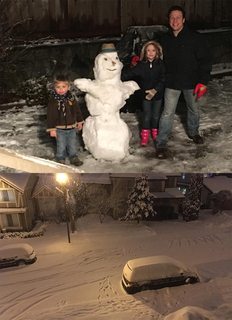 For 9 and a half years, I had a canned answer whenever someone would ask me why I chose to live in Vancouver, BC.

The answer was very smooth.

I'd just say, "I had had enough of snow in Moscow, so I wanted to move to a place that doesn't have it."

See how it worked out for me?

When the first snow fell, we rushed outside to build Frosty the Snowman. I was so worried it would melt too fast, because it doesn't snow in British Columbia, right? :)

Instead, we had a blizzard that night and see what happened to the road. Just so you understand, we shoveled the entire driveway all the way to asphalt earlier that day.

Frosty has lost his mouth and right eye, but somehow still hasn't melted yet.

I'm hard at work thinking of a brand new reason to give to people if they ask me why I chose Vancouver over other places in Canada.