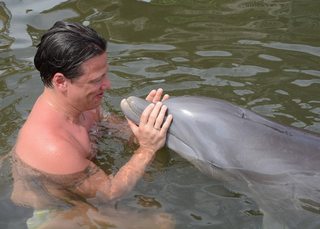 This was our first beach vacation in 9 years.

The plan was  perfect—as much as a plan that involves traveling with 3 kids could ever be perfect.

Instead of frying our bodies on the same beach in Miami for 2 weeks, the idea was to fly in to Miami, rent a car, drive around the coast of Florida and fly back from New Orleans.

As Mike Tyson wisely remarked, "Everyone has a plan 'till they get punched in the mouth."

First, our 50-minute layover in Houston became a 5-minute layover because our first flight got delayed because of Harvey that was about to hit Texas. We managed to get our connecting flight and got to Miami.

The weather in Miami was horrible. It was cold and rainy. This was when I realized how happy I was that we didn't book a hotel in Miami for 2 weeks. That would have been quite a beach vacation...

The Keys and Clearwater were great.

We had a ton of fun.

One of the attractions the kids asked me about was to go and swim with the dolphins.

They said it'd be the best thing ever.

So we went. It was great—and you can see the proof!

As we got to Clearwater, we kept seeing news reports about the devastation left after Harvey and forecasts that it was about to hit New Orleans and Pensacola.

Without the kids, we'd probably stick to the original plan, but this time around we decided to just stay in Clearwater.

So we changed the flight to go back home on September 3.

And guess what, it still had the connection in Houston! But again, with no delays or cancellations, we managed to get home, safe and sound.

And then we learned about Irma that started to get serious just as we left Florida.

All in all, to know that we narrowly escaped two major storms was a very interesting experience.

What did YOU do this summer?